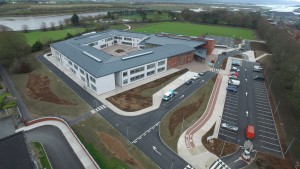 There were great celebrations in Dundalk on Friday 6th of May as the new school building was officially opened in perfect conditions.

A ceremonial procession made its way from Churchill House in St Nicholas' Street, past the Marist church, down St Mary's Road and onto the new school campus.

The procession was led by Rev Jimmy McElroy s.m. followed by two students carrying candles. Behind them came the representative of the Parents' Council, Niall Bailey and the representative of the Board of Management, Catherine Shaw, both of whom carried the Icon of Jean Claude Colin (founder of the Marists). The Marist School Flag was carried by students. Two past pupils, now staff members, Karla Doran and Liam Reilly, carried the Marks Books and the Register. Con McGinley, the Principal, carried the old school bell which used to call the boarders to meals and classes.

Behind came the Marist Fathers from far and near accompanied by local Diocesan clergy, followed by Rev Hubert Bonnet-Eymard s.m., the Provincial Superior of the society in Europe, Rev John Hannan s.m., the Superior General and Archbishop of Armagh, Eamon Martin. Students and staff lined the route of the procession and then followed on to the new campus.

On arrival before the new building the school flag was raised before everyone proceeded into the school hall for the celebration of the Opening Mass. The guests and school choir were already there and they sang beautifully in welcome.

During the Mass, Rev John Hannan s.m. welcomed all the guests, staff and students and thanked everyone who contributed in any way to the great achievement which the new school building represents. He spoke about the importance of ethos and the Catholic nature of the school and mentioned the fact that the school welcomes students of all denominations. He himself had been a pupil here and also a member of staff.

Later the Archbishop thanked everyone and mentioned that he felt part of the journey on the day. He also told the congregation about the new school he had been reading about in Syria when he received the invitation to this opening – a school whose situation was completely different.

The Mass ended and the guests were invited to partake of lunch in the new canteen after the official cutting of the ribbon at the front door. Rev Hubert Bonnet-Eymard performed this duty.

Students were delighted to act as tour guides and proudly show their new school to groups of guests.

It was indeed a red-letter day for Catholic education in Ireland as we officially opened a 900 pupil capacity modern school which is open to all young people from Dundalk and its environs.

Official Press Release on the Opening:

NEW STATE OF THE ART BUILDING TO OPEN AT ST.MARY’S COLLEGE DUNDALK.

The new building which will be officially opened on Friday 6th May was provided by the Department of Education & Skills under the Public Private Partnership Project scheme. BAM PPP completed the construction of the new School in a 16 month period. BAM PPP along with their sister companies BAM Building and BAM FM are delighted to be associated with this exciting Schools Bundle 4 project which with the assistance of Enterprise Ireland and the NDFA brought welcomed stimulus for jobs growth back to the economy for the duration of the building period and will extend this into the full 25 year concession period.

The site was provided by the Marist Fathers who have been Trustees of the college since its foundation in 1861.

The eco-friendly design of the building is expected to reduce the current expenditure in running the school by a significant percentage. It incorporates all that is best in modern school building design. The classrooms and teaching spaces include specialised rooms for the teaching of a broad curriculum which enables the school to offer a wide range of subjects including Languages, Business, Science, Mathematics, Technology, Materials Technology (Wood), Metalwork, Physical Education, Art, Music, & Drama.

The magnificent new building is complemented by a dedicated and dynamic staff which is looking forward to building on the excellent reputation of the college and serving all the students in their care by enabling them to reach their full potential.

The Marist Trustees and Board of Management of the college welcome representatives of the wider Marist family of schools in Europe. The Marist order was founded in France in 1836 and there are strong links between all the Marist schools in Europe. Fr. John Hannan, Superior General of the Marist Fathers joins us from Rome for the opening of the school along with Fr. Hubert Bonnet-Eymard, European Provincial who has come from Paris.

Principal Con McGinley said ‘This new building is an exciting renewal of St. Mary’s College, a part of Dundalk for over 150 years. We will continue to provide excellence in education for all our students’