THE SOCIETY OF MARY

THE SOCIETY OF MARY was founded by Jean-Claude Colin (1790-1875) in 1836 in France against a background of political and social unrest following the events of the French Revolution and the collapse of the Napoleonic Empire. Members of the Society of Mary are commonly known as Marists. Marists have a special devotion to Mary and they are called to think, judge and act as Mary in all things.

From the very beginning Jean Claude Colin regarded the education of the young as “entrusted by providence to the Society of Mary”. The early Marists were committed to education and missionary work with a particularly strong presence in Oceania.

Two centuries later there are Marists schools in many regions of the world. In Ireland there are three colleges, St. Mary’s College Dundalk founded in 1860 Catholic University School in 1867 and Chanel College Coolock in 1955.

The original vision of Fr.Colin focused on the central importance of the task of educating young people as Christian Citizens and the value of every young person as a unique individual. These values continue to be core to the education mission in Ireland.

Until the 1960s this work was primarily carried out by the many Marist Fathers who taught in and managed our schools. Over recent decades this has changed. Today our schools are places of increasing partnership between lay staff, pupils, parents and Marist communities. The Marist Fathers are the owners/trustees of the three schools and continue to be committed to upholding the characteristic spirit of the founding fathers. This characteristic spirit or ethos is expressed in a contemporary context. To assist schools in their tasks the trustees, in 2003, created The Marist Education Authority which acts on behalf of the Marist Provincial and his Council in trustee matters with the primary objective of safeguarding and promoting the Catholic and Marist Ethos in the Marist Schools.

Teachers in our schools have an obligation to support and uphold the characteristic spirit or ethos of the Society of Mary as outlined in this documentation.

Further information is available at www.maristfathers.org 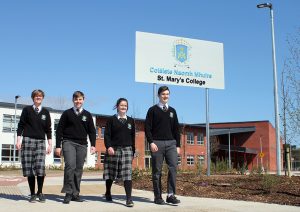 St. Mary’s College was founded in 1861, by the Very Reverend John Leterrier, S.M. He came from Lyons for the purpose, at the invitation of Dr. Kieran, P.P., and with the cordial approval of the then primate. There was no second level school in the town for Catholic boys at this time and Dundalk was the site of the first Marist school in Ireland.

The Society purchased a building, which had previously been known as Church Hill House. This house is still part of the school where the offices are situated. The school was opened on the 17th of September with twenty-five day pupils. Dean Kieran’s recollection was that the school “was for the sons of merchants and shopkeepers”.

Although the house then in existence was large, an addition had to be made in 1863, at a cost of between £2,000 and £3,000. So as soon as the new buildings were ready for occupation a limited number of boarders were taken. The demand for admission increased rapidly, and in 1874 it was found necessary to make a still further extension, at a cost of £3,000. In 1881, several small houses in the vicinity were purchased, and fitted for classrooms. The Superiors of the Order, who desired to make an important centre of their work in Dundalk, raised all the money spent on improvements.

In 1880, a small convent was added, in which resided a few nursing sisters of the Order of Bon Secours. These ladies looked after the health of the pupils in what was known as ‘The Infirmary’ and then as ‘The Red House’, now it is where the priests live and is called ‘Cerdon’.

At this time St. Mary’s College took students from every part of the country, and even some from the most distant British Colonies. The fee for boarders was £25. By 1885 over a thousand students, boarders and day pupils, had passed through the school. The acquisition of ‘Major Brown’s Meadow’ resulted in a considerable addition to the grounds. Handball, football and cricket were played.

For the next hundred years, the school had a Boarding and Day section with a Primary School attached. The Boarding section was closed in 1983 and the Primary School closed in 1987. In 1990, the first lay Principal was appointed, Mr. Cecil Hughes, and the school was opened to girls in the same year. Fr. John Mulligan, the last teaching priest retired in June, 2000 when there were over 700 students and 44 teachers.

More information can be found on the web-site at;

Chanel College in Collock Village, Dublin 5, was founded in 1955. The Archbishop of Dublin at the time, Dr. John Charles Mc Quaid, asked the Marist Provincial, Fr. Cusack, to open a new secondary school in the growing suburbs of North Dublin.

The school opened on the 13th September 1955 in a large house “Larkhill” purchased from the Kelly-Tighe family. It wad surrounded by 19 acres of land. The school opened with an enrolment of 31 students.

Over the years the College and the buildings have developed and the enrolment now totals around 450 students.

The school is named after St. Peter Chanel the First Marist Saint. Peter Chanel was a missionary on the island of Futuna in Oceania. He was martyred on 28th April 1841.

Catholic University School was founded in 1852 to prepare students for the new Catholic University. Originally under the direction of the Archbishop of Dublin it transferred to Marist ownership in 1867. Fr. Letterier was the first President and close confidant of the founder Fr. Colin (1790-1887).

The school moved from Harcourt Street to Leeson Street in 1867 and has a long tradition. In the Marist tradition it is known for its respectful and informal atmosphere between the teachers and pupils. CUS is an academic school and pupils are expected to achieve their full potential whatever that may be. The school also believes in providing a balance in students lives by offering opportunities to develop rounded personalities, caring relationships and a sense of responsibility in their personal lives. CUS does this because Marists believe in educating the whole person – their minds and bodies and above all their hearts and spirit.

The best way to learn is through experience and we believe that CUS offers an experience of a Christian community that will help each pupil to become the person that God intended them to be. Teachers in CUS are expected and obliged to fully uphold and support the ethos of the school in this regard.