On Friday 13th May three Marist Schools came together to participate in the 7th annual Marist Schools Public Speaking Competition. It was held in Catholic University School and attended by St. Mary's College Dundalk and Chanel College, Coolock. It is a competition specifically for first years who have an interest in debating and public speaking. The topic was ‘It is difficult being a teenager in today’s world’. Excellent points were made eloquently by all participating speakers. Well done to Xin Dacao, Sean O Connor and Aaron Norman who came first, second and third respectively. Many thanks to adjudicators Joseph Collins and Nathan Lyons Duffy from fourth year. 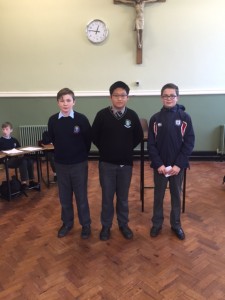